Liquid ammonia NH3 (anhydrous ammonia, liquefied ammonia, cooled ammonia) is the most concentrated and cheap nitrogen fertilizer containing 82.3% nitrogen, the rest – hydrogen. The density of liquefied ammonia at a temperature of 20 °C is 0.61 g/cm3 and the boiling point is 34 °C.

Liquid ammonia is applied to the soil in autumn, spring, or during fertilizating of row crops (corn, sunflower) with special machines. Ammonia is absorbed by the soil solution, adsorbed by its colloids, and is not washed out. In this case, ammonium hydroxide is released, which interacts with the anions of the soil solution to form various salts. Ammonia is better fixed on heavy and loamy soils with moderate humidity (50-60% of the total moisture capacity). Under such conditions, sandy loam soils can contain 1600 kg, loamy – 2700 kg of ammonia per 1 ha. Ammonia losses are about 1.5%.

When applied to dry or very waterlogged soil, ammonia losses increase, in particular with shallow embedding and on soils of light granulometric composition. Therefore, it is crucial to correctly set the depth of fertilizer application.

Liquefied ammonia on soils of heavy and medium granulometric composition is applied on a depth of 10-12 cm. On light soils, this fertilizer is stored longer in the form of NH3, therefore its gaseous losses are possible; the depth of application should be at least 14-16 cm. On insufficiently cultivated areas, waterlogged or dry soils, as well as after liming, the depth of ammonia application is increased by 3-5 cm.

In the ammonia application zone, the soil is temporarily sterilized and nitrification stops. However, after 1-2 weeks, the number of microorganisms in the soil is restored and, due to better nitrogen nutrition, continues to exceed the initial level. Under optimal conditions, the process of complete nitrification of ammonia is completed within a month. This helps to reduce the pH of the soil solution, therefore the fertilizer will have a physiologically acidic reaction. pH change has a positive effect on the availability of phosphates and soil trace elements for plants. The introduction of ammonia into the root layer of the soil can lead to the partial destruction of root hairs and root tissues. Its negative effect is observed until ammonia is converted to ammonium. This lasts from several hours to 10-15 days, and then ammonium begins to be absorbed by the root system of plants. The amount of ammonium absorbed depends on soil and weather conditions, thus it is advisable to apply liquid ammonia before sowing crops.

The agrochemical assessment of ammonia is almost equivalent and in some cases higher than the equivalent amount of nitrogen introduced with solid nitrogen fertilizers. 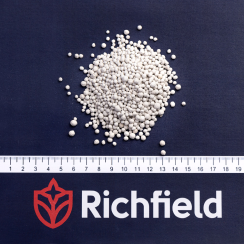